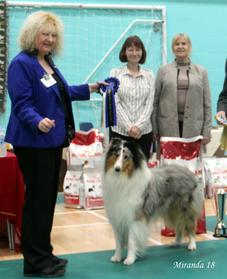 ​East Anglian Collie Association had its championship show on 5th August. Six dogs entered so a car full! Polly was placed reserve in the minor puppy bitch class, Grace unplaced and Erin unplaced under judge Edith Pryor (Aqualita). The boys did better, Luther winning his class, Odin taking a second and Geno a third in the society's first champion class.

A very wet Leeds Ch Show on 29th July. Only took the new girls to try them out in the Minor Puppy Bitch stakes under judge Keith Baldwin (Nightstorm). Grace was unplaced but Polly only went and won the class.

Off to our local Bakewell Show on 22nd July under breed specialist Pat Hutchinson (Karibuni). Erin was placed second in Open but Luther won his class, took Best of Breed and Pastoral Group 4.

8th June - Three Counties Ch show under judge Mick Taylor (Bruernish). Geno unplaced in Open Dog but Odin took 2nd in Limit Dog and Luther won Graduate Dog and was moved again in the challenge for the RCC. Odin then topped it off by taking 2nd in the Special Yearling Stakes under judge Keith Baldwin (Nightstorm).

Just took Luther along to the Loughborough open show on 19th May. Judge Mike Braddish (Bradmigail) giving Luther 1st in Open and Best of Breed.

13th May was the National Ch Show under judge Nick Smith (Tentola). I took Luther, Odin, Geno and Erin. Luther winning Graduate Dog, Odin second in Post Graduate and Geno and Erin both 4th in their respective open classes.

6th May and took Geno and the Blues Brothers to the Lancs and Cheshire Ch Show under judge Derek Smith (Clickam). Geno and Odin were unplaced but Luther was placed 2nd in Graduate Dog.

21st April (my birthday) and off down to the Working and Pastoral Breeds of Wales CH Show under breed judge Lene Newman (Phreelancer). Odin won the Limit Dog class and Erin took 2nd in the Limit Bitch class.

15th April was the EACA open show down in Cambridgeshire. A great day for the fur kids under judge was Fay Hutchings.  Luther, Odin, Geno and Erin all winning their classes and Luther going on to take Best Dog and Best Opposite Sex in Show.

31st March and back over to Newark for the North Lincs Dog Show. Judge Simon Luxmoore (Hushwing/Zima) awarding Luther and Odin 1sts in their classes and Odin Best of Breed with Luther Reserve Best of Breed. Geno then got reserve in the AV Champion stakes under judge Keith Derry (Vistca).

18th February and off to the open show under judge Hayden Feetham. Luther and Geno both winning their classes. Luther taking Reserve Best of Breed and Geno taking Best of Breed and then Group 4 under breed specialist judge Angela Harvey (Wicani).

20th January and the first CH show of the year, although no CCs for us. Judge was Dianna Spavin (Dialynne). Luther, Odin and Erin placed 3rd, 5th and 2nd respectively.

Nipped along to our local agricultural show, Ashover on 8th August. This time Polly unplaced but Grace took Best Puppy in Show. 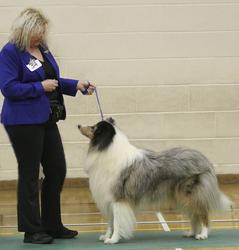 27th October - What a super day for us at the Selby CS open show. Judge Mrs P Wells (Kortebin) giving Polly Best Puppy in Breed and Odin Best of Breed. Then in to the groups where judge Mick Taylor (Bruernish) gave 1st in the Pastoral Group to Odin and 2nd in the Puppy Group to Polly.

Just a gap of 3 days and then off down to East Anglian Collie Association Collie of the Year competition with Geno and Odin. Geno was shortlisted for Adult of the Year. Odin won Puppy of the Year for 2017 and then took on the Veteran and Adult to be crowned Supreme Collie of the Year 2017. Huge thanks to judges Marianne Benton (Oakestelle) and Britt-Marie Young (Farouche) 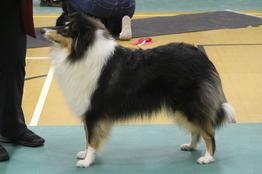 10th November and down to Coventry for the Walsall open show. Polly took Best Puppy and Odin Reserve Best of Breed under judge Jacky Cutler (Lankeela).

What a great start to the new year. Took Geno, Odin and Erin to the Boston CH Show on 4th January. A very windy day down at the Peterborough Showground. No tickets for us at this one but the kids did me proud. Erin taking 3rd in Open Bitch, Geno winning the Open Dog Class and Odin winning the Post Graduate Dog class and Best of Breed under all-rounder Keith Baldwin (Nighstorm).

26th October and Midland Counties Championship show. Judge was Albert Wight (Sharval). Polly and Grace were unplaced in their classes but the star was Odin who was placed 2nd Open Dog and then took the Reserve Challenge Certificate.

13th October and the Grantham open show at Newark. Geno and Polly both winning their classes and Geno also taking Best of Breed under judge Nichola Graves (Pipsacre). 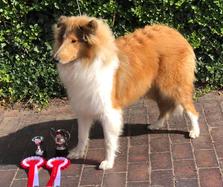