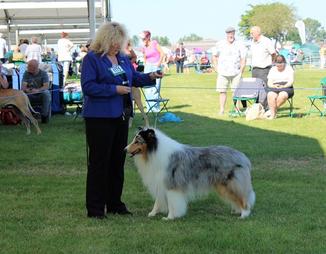 Another great day for us down at the East of England CH show on 5th July. The judge was Zena Thorn Andrews (Drakesleat). She awarded Odin second in Open Dog and the Reserve CC behind Ch Corydon the Ringleader, who was in superb body and coat. Grace couldn't go as she is in season so took Geno in the Champion Stakes class under Jim Peach, but he was unplaced.

Two open shows this weekend. Sunday 19th May was the Pollard CS open show at its new venue of Locke Park. The judge was J Purnell (Yikasown). Grace won her Junior class and Luther took second in open.

Saturday 18th May was the Loughborough open show, not judged on the group system. Sue Forman (Suzdans) was judging. Grace won the junior class and Best of Breed whilst Odin took the open class.

10th August and off to the Harrogate & DCS open show under judge Ann Turner (Barkston). A very cramped venue at a farmer's market. The rings were very small and between the animal stalls. Polly was placed 2nd in the Post Graduate class and Odin won the Open class and also Best of Breed.

EACA CH Show was held at Littleport on 4th August and as usual the weather was hot and humid. Had originally entered 5 but Grace stayed at home blowing coat. The dog judge was breed specialist Ros Macdonald (Rossavon) who placed Luther 2nd in Post Graduate Dog and Odin 2nd in Limit Dog. Bitch judge was breed specialist Maxine Mellish (Demelewis) and she placed Polly 1st in a large Post Graduate Bitch class and Erin 2nd in Open Bitch.

East Anglian Collie of the Year contest started the year off for us. The all-round judge was Kevin Young (Sunkap) and the breed specialist was Brian Hull (Lizmark). Although 5 had qualified I only took Polly and Odin. Polly was shortlisted down to the last 4 for Puppy of the Year and Odin was also shortlisted down to the last 6 for Adult of the year.

A sad day for us today - 4th July. We had to say goodbye to Jake (Mejola My Blue Harlequin). Winner of our first ever KC Stud Book Number. He had been struggling for several months with a bowel tumour and many pills, steroids and powders had been tried. He lay in the shade under the hedge this morning and told me it was time. RIP Big Jake!

Saturday 8th June and another day to remember. It was the Three Counties championship show held at Malvern. The judge was Richard Kinsey (Kitarn). I had entered Luther, Odin and Grace but Luther is still re-growing coat. Odin was placed first in Open Dog, then took his second CC and was also Best of Breed. Grace, who hadn't been liking the indoor venues, decided that she did today and was placed second in Junior Bitch. The rain cleared by the time the group went in so we were able to go outside. Odin was shortlisted down to the last 7 by judge John Carter (Montzella).

Tuesday 17th December and the postman delivered Odin's Show Certificate of Excellence. I am told he is the first Rough Collie to have achieved this new award. Huge thanks to all the judges who have given him Best of Breed and Group Placings.

Sunday 1st December and the final show of the year for us and off up to Middlesborough for the Eston & Barnaby Canine Society Show under judge Lorraine Quince (Karafaye). Polly had to miss her class as she has come in season but Odin took Best of Breed and then went on to Pastoral Group 4 under judge Stephen Proctor. Odin had needed 1 more point for his Show Certificate of Excellence so this was a nice 2 points to finish it off.

Sunday 17th November and off to a wet Newark Showground. The judge was Mrs J Power (Powerforce) and She placed Odin 2nd in open whilst Polly was unplaced in the Post Graduate class.

Saturday 26th October and up to Snaith for the Selby C S show. Polly won the post graduate class under judge John Thirlwell (Ferndel) and Odin placed 2nd in the open class.

Saturday 21st September and off to the Bedford & DCS open show under judge Glen Davies (Waterley). My granddaughter Torri handled Polly to win the Post Graduate class and Reserve Best of Breed, Odin won the open class and Best of Breed.

A fortnight's rest and then off up to the Darlington CH Show held at Ripon Racecourse on 14th September. Took Erin, Odin and Polly so a quiet day at home for everyone else! The kids did me proud. Odin winning Limit Dog and his 5th Reserve CC under judge Graham Hill (Dimland), Polly taking second in Yearling Bitch and Erin fourth in Limit bitch, both very large bitch classes. Then took Odin in to the RCC stakes under judge Keith Baldwin (Nightstorm) where we were placed fourth and got some prize money back.

Sunday 16th June and off to Chesterfield and Pinxton KA open show. Thankfully the rain held off so we could show outside. The judge was breed specialist Gina Stillwell (Bellawave) and she gave Grace 1st in Junior and Odin 1st in Open and Best of Breed. We then went into the group under Richard Lucas (Aculsia) who gave Odin Pastoral Group 2.

Sunday 9th June and a local show for us, Ashfield & District CS. Luther didn't go as he's still out of coat but Grace won her Junior class and Odin won Open and Best of Breed from judge Alexandra Adshead (Afonbach) and then in the group judge Barry Blunden (Licassa) awarded Odin Pastoral Group 2. 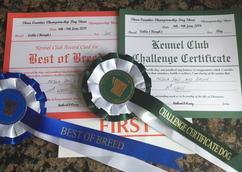 Sunday 21st July, our 5th show in 5 days. The atmosphere at all recent shows has been very friendly and relaxed. Today at the Bakewell Agricultural & Horticultural show I had entered 5 dogs but two of the girls were missing due to being in season. A good day for the fur kids. Polly winning her last junior class, Luther taking Post Graduate and Reserve Best of Breed and Odin taking open and Best of Breed under judge Mrs C Newton (Sylvaerae). Nothing for us in the group today.

An evening show on 18th July, the Frecheville (Sheffield) & DCS. Our judge was Adam Hollis (Adjucet) and Polly won the junior class with Odin winning open and Best of Breed. Odin then went on to take Pastoral Group 3 under judge Sarah Hattrell (Khinjan).

Sunday 14th July and this time down to Huntingdon Racecourse for the EELKS show. Just took Odin under judge Dave Morrant as he had only recently gained Best of Breed and Pastoral Group 1 under the same judge. Today was only placed 3rd in open dog.

Saturday 13th July and off to Malvern, one of my favourite showgrounds when we are outside. Both Erin and Grace couldn't go due to being in season, but Odin finished 2nd in Open dog behind Ch Karafaye Black Quillan. 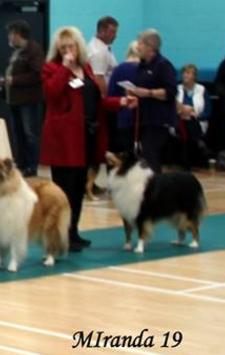 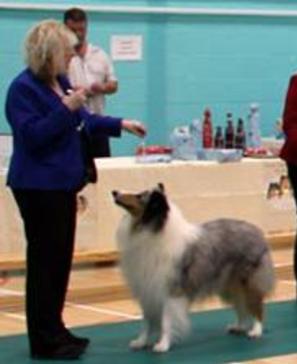 Thursday 9th May and off to Stafford for the Birmingham National championship show. Wow what a day for us. Luther won the Graduate Dog class, Odin won the Limit Dog class and took his first CC from judge Bob Gay (Yagane). Polly was placed second in a large Junior Bitch class and Grace taking fourth in Yearling Bitch. Over the moon with how the kids performed. 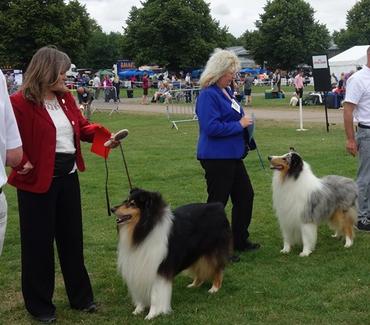 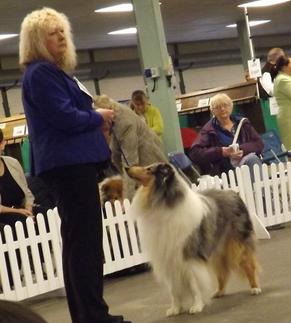 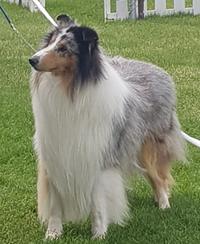 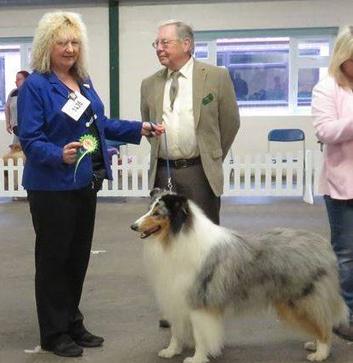 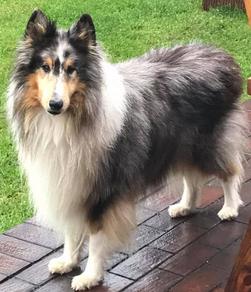 Bank holiday Monday 6th May and off down to Coventry for the Banbury open show. The judge was Marion Hodgson (Ddalrus) who awarded Grace first in Junior and Odin first in Open and Pastoral Group 4.

Sunday 5th May and off to the Lancs and Cheshire Collie Club championship show under breed specialist judge Sue Randall (Ladnar). Luther and Odin were unplaced in their classes but Polly gained a 3rd place and Grace a 2nd place.

A nice Easter weekend for my birthday and then off to the Eastwood Kennel Association open show at the Kennel Club buildings in Stoneleigh. The judge was Russell F Jones (Quemerford) who gave Polly 2nd, Grace 1st and Odin 1st and Best of Breed. Followed up by Pastoral Group 4 under judge Bridgette Bodle (Kitarn).

A long drive up to Durham on 13th April for the Northumberland and Durham championship show. A very slippery floor which the boys hated. Luther winning his class and Odin placed second in his under breed specialist Miranda Blake (Corydon). Polly unplaced in her class under judge Rod Slater (Stanlox).

30th March and off down to Milton Keynes for the Herts and Essex Border Canine Society Show. The judge was Monet Rennison (Zaniah) and she gave Grace 2nd and Luther 1st in their classes but little Polly took 1st and Best of Breed.

Crufts was held on 8th March at the NEC, Birmingham. I only took Odin under breed specialist Mr J Catliff but he was unplaced.

First championship show of the year with tickets for us. Breed specialist judge Gwen Beaden (Myriehewe) gave Luther 3rd in open dog, thus giving him his stud book number. Odin won the limit dog class and was shortlisted to the last 3 for the ticket. Polly and Grace were unplaced.