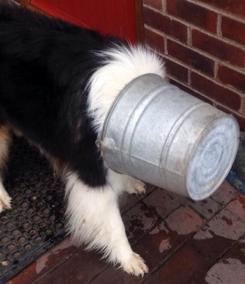 Donna, Erin's daughter, was the mother of Geno's first litter. Such a lovely natured and loving girl. She is now owned and very much loved by a family in Kent who also own one of her puppies. I am told that she is glued to their disabled grandson. 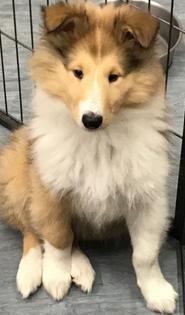 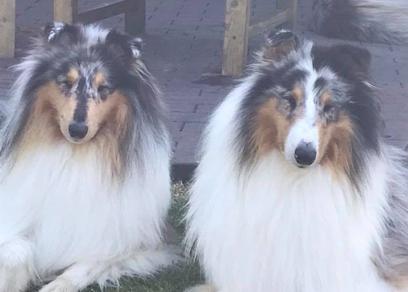 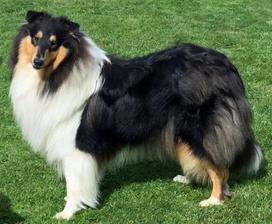 Born in January 2018 to Geno and Donna we kept Polly and Grace. Again keeping siblings means that one tends to have to go in to a higher graded class. Polly spent much of her first winter with Odin at indoor open shows as she doesn't mind the slippery floors. She missed out on her junior warrant by a few points.

As my bitches don't seem to come in season very often I decided to mate Grace to Corydon Riffson as she didn't have her first season until 17 months of age. Grace had one large pup! Born 6th September 2019, this is Ruby! 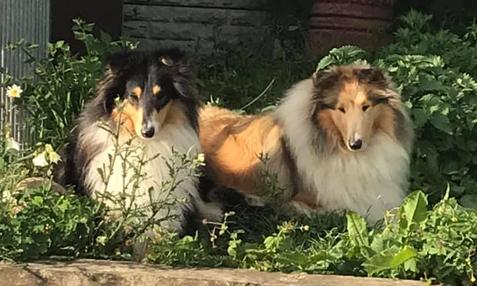 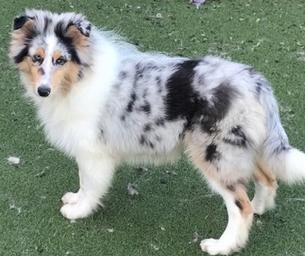 Here are Donna's brothers, Erin's two blue sons, that we kept. Luther and Odin. Known at home as the Blues Brothers. Both boys love showing and quickly gained their stud book numbers and taking many Best of Breeds at open shows. Keeping siblings always means that one tends to take a back seat. Odin has excelled at championship shows and has currently gained 2 CCs and 5 RCCs and has been shortlisted in the Pastoral Group. At open shows he has had many group placings and 3 group wins and has become the first rough collie to gain the new Show Certificate of Excellence award. I love the construction of my dogs and all have good hip scores.

I've always found it so much easier to bring two pups up together as they can't be with the adults straight away. Needing a companion for Ruby we decided to buy a pup in. Here is Vinnie, born August 2019.

Laura and Candy both aged 12 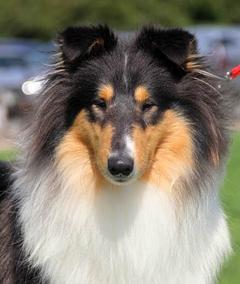 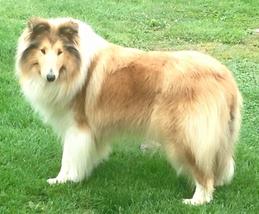 Geno’s sister Mia was somewhat overshadowed by the success of her brother and me not wanting to enter them both in the same class. She nevertheless gained her stud book number by winning the Limit Bitch class at Darlington CH Show under Mick Taylor (Bruernish) in 2015. Mia now lives with friends of ours. 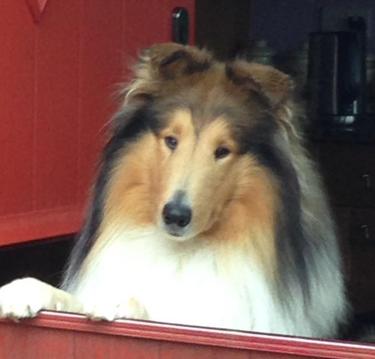 In July 2013 Talia produced a wonderful litter which as a result means I have now sent rough collies to Germany, Belgium and Finland. I wish all the best in their show careers to Mejola Maid with Class (who has gained her UK stud book number and Multi International Champion and Veteran Champion titles), Mejola Maid to Measure and Mejola Hand Maid. Out of this litter I kept two pups.
First born to Corydon the Persuader, Geno’s first time out was at Manchester Championship Show under Sue Randall where he was placed 3rd in Puppy Dog. He has gone from strength to strength. At 13 months old he had gained 12 first places (5 at championship shows), 7 Best Puppys (2 at championship shows), Puppy Group placings 1 and 4 and Best Puppy in Show at Open Shows. VHC in a large junior stakes class at Leeds Championship Show under Robin Newhouse (Annecy) and the icing on the cake, the Dog CC, Best of Breed and Reserve Best in Show at the East Anglian Collie Club Championship Show under John Blake (Corydon) and Lene Newman (Phreelancer). Geno won both his classes at the Yorkshire Collie Club Championship Show under Tomas Rohlin (Rollington), which gave him his Junior Warrant. Geno was one of only two dogs shortlisted at the East Anglian Collie of the Year 2014 by judges Tomas Rohlin and Henriette Pahl. Geno won almost all the Limit Dog classes he entered at championship shows. In July 2016 he took the Reserve Dog CC from Jeff Luscott at WECS and Val Geddes at EACA. In August 2016 he annexed his second CC and BOB under Margaret Wildman at Paignton then waited another 12 months before gaining his crowning dog CC under Miranda Blake at Windsor CH Show. Geno's first litter were born in January 2018, 6 girls and 4 boys. We have kept 2 girls.

Cora’s last litter appeared in June 2009. Out of that litter came Jake and Heather. Heather (Mejola My Blue Heaven at Corydon) was named by Barbara Blake who had eagerly awaited a blue bitch and Heather is now owned by Miranda Blake.
Jake gained many first prizes at both championship and open shows throughout his puppy and adult career, including a Best Puppy in Show at an open show. In 2013, winning 3 Limit dog classes at Championship shows under Miranda Blake (Corydon), Stuart Mallard (Tuckles) and Val Geddes (Ingledene), he gave us our first home owned stud book number. 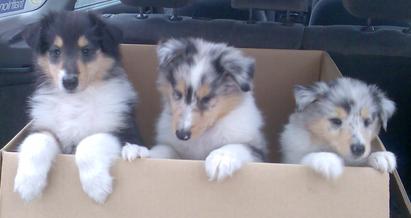 In November 2008 the gang was joined by Talia. I’d wanted a nice sable & white bitch for quite a while and Talia fitted the bill. Her ears were always in show mode and I had real fun with her as a pup. Her best puppy wins were Best Puppy in Breed at WECS in 2009 under Jeff Luscott (Jalus) and Reserve Best Puppy in Show at York CS Open Show.  She has spent quite a bit of time out of the show ring rearing two lovely litters of pups. Talia was beaten by her daughter Mejola Maid with Class (Amy) at the EACA CH Show in August 2014 but, having won the open bitch class at the April 2014 open show, qualified for East Anglian Collie of the Year 2014 where she duly won Adult of the Year under judges Tomas Rohlin (Rollington) and Henriette Pahl (Pahlex). 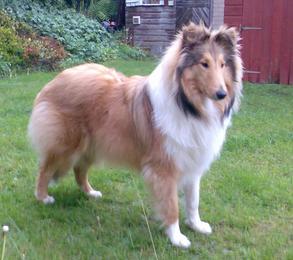 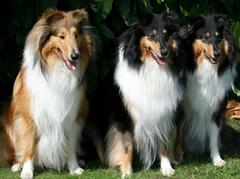 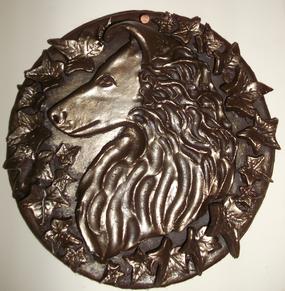 Arnie won many Best of Breeds and seconds at Championship shows but was never given the recognition I felt he deserved, but I was biased of course. After losing a tooth in a collision over a pigeon in summer 2009, I reluctantly decided to let him go to a pet home. He lived a happy life with the McCulloch family until he was 13.
Faye was always a  fantastic show girl. She would show for anyone and moved round the ring like a steam train. She won a very large Post Graduate bitch class at Richmond CH Show under Hugh Jones (Seafire) and just missed out on the RCC (according to the write up). She went from strength to strength as a veteran and won several veteran classes at both Championship and Open Shows. She would get extermely cross and vocal when we went to a show if she’s wasn't entered! 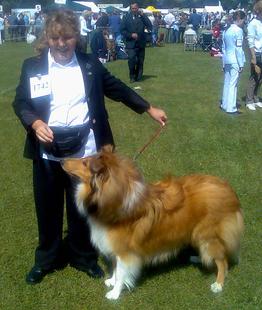 Cora was always  a  good show girl and still stood for her treats to the end. I decided to mate Cora and our first litter was born on 18/10/2005. I decided to keep two pups out of the litter, Arnie and Faye.
My younger daughter Megan was by this time in the junior handling ring too and often showed Arnie or Faye. 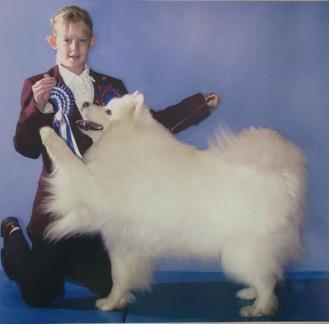 I arranged a visit to the Corydon Kennels. I fell in love with the dozens of dogs that ran up the paddock towards me. They had a litter of 10 pups that were all spoken for but Barbara agreed to let me know when their next one was due. Early January 2003 I went and picked Cora.
My eldest daughter Laura was now in to Junior Handling in a big way and was mostly handling Lil Harringtons samoyeds but also showed my collies and won many top handling awards.

Being a complete novice I didn’t do my homework and focussed too much on price and location. I saw both parents who were lovely dogs and was shown the only sable remaining. I came home with Ben (Bluella Madd Max at Mejola). Ben learned quickly and was good at following commands but was quite nervous. I took Ben to a local Fun Dog Show for a day out and was placed in the puppy class by Frank Castellucio. As I came out of the ring I was met by a lady with a rough collie who said that I ought to go to ringcraft and a few shows to see if Ben would overcome his nerves. The lady was Lil Harrington of Norchar Samoyeds and DeVale Rough Collies.I had never intended to show dogs but after joining the local ringcraft and attending a few shows I got the bug. I soon realised that Ben hated showing. He was a pet who just wanted to lay by the fire.
I decided to get a  second collie. I rang the Kennel Club and asked for a list of puppies available. To my amazement they came in three colours not just the one!
I drove to Chinley to meet Dawn and Dave Barton of Crackenedge Rough Collies. They had a litter of all bitches 1 Tricolour and 3 Blue Merles. They also had the mother, grandmother and auntie. I came away with Frankie. Frankie enjoyed showing and had a number of Best of Breeds over the years. I started to learn from comments made by other exhibitors that Frankie wasn’t the perfect specimen and improvements could be made via breeding. The most helpful to me at the time were Barbara Blake (Corydon) and Anne Flint (Highnol).
Breeding was never in my head but I was persuaded to try with Frankie a few times but without success. That was it, I had to aim higher and the one kennel that was repeatedly pointed out to me and that I had admired in the ring was Corydon. In those dogs I saw the original Lassie that I had waited so long for.

I never really knew how old Smiler was. He had been found wandering the streets. We guessed he was about 4. Smiler died on 30th August 1999 of lung cancer aged probably around 9. By then my 2 daughters had gotten used to having a dog around and I was determined this time to get my long awaited rough collie.

I decided to add another Tricolour bitch to the kennel. My goodness, what a  handful! She is so clever/naughty and does whatever she pleases at home, but is a born showgirl and never stops showing in the ring. She won a large minor puppy bitch class and qualified for Crufts at her first show, the Welsh Kennel Club under Andrew Brace. She then went on to take BPIB at Richmond CH Show under Jeff Luscott (Jalus) and the large PB class at the Collie Association CH Show under Rod Slater (Stanlox). She gained her Junior Warrant at 15 months of age. She is Erin! In 2016 Erin had her first litter to Ch Corydon Once in a Blue Moon (Ross), his last litter as it would turn out. There were three blue dogs and a tricolour bitch. In my madness I kept 3 of the 4. Erin has taken a bit of a back seat to her kids but we hope to get her back out soon. 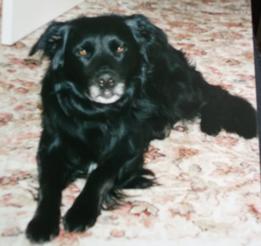 Monty lived to the age of 15 by which time I had left home. I was in an end terrace with a moderate back yard and plenty of fields for walks so I decided I’d get another dog. The local newspaper was carrying an advert for Ashbourne Animal Welfare and it seemed such a shame not to rehome one of these needy pets. I was vetted and allowed to bring home a black collie x retriever who had already been named Smiler. 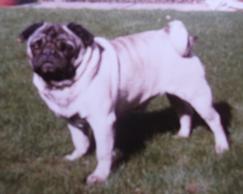 I was the typical little girl who grew up wanting Lassie. My parents promised me I could have one when I was 12 years old. A few weeks before my 12th birthday my mother came home from work and asked me if it had to be a collie. She worked at an old folks home and the matron there owned a pug puppy, but due to her many holidays and travelling wanted to rehome him and we could have him straight away. So Monty (Cuckoohaven Cym) joined the family.