A very long wait to find the Paignton CH Show critiques for the boys but they eventually came. LD (4,0) 1st White’s Mejola I Am Persuasive JW. Sable male of 3yrs, stylish, balanced and all of a piece with sharp profile outline. Very sound boy with well balanced clean wedge shaped head with flat skull & correct planes, beautiful expressive obliquely set eyes, small well used ears and good mouth with correct dentition & bite. He had a good reach of neck that was nicely arched and let into well laid back shoulders. His body was super shapely and so well put together with well sprung ribs, deep brisket and firm topline with slight rise over loin. He had excellent rear quarters, correct tail set & carriage & beautiful profile outline. He was full of himself with lots of attitude and used himself well and he showed to advantage and moved easily and freely with a sure footed gait that was both economical and pleasing to see, taking smooth strides of equal length with a good reach from the front and definite thrust from the rear and I was pleased to award him the DCC & BOB.  VD (2,0) 1st White’s Mejola My Blue Harlequin. Blue merle male of 7yrs with profuse coat and balanced wedged shaped head. He had expressive almond shaped eyes, semi erect ears, good muzzle & mouth and correct dentition & bite. He was very shapely with well covered frame, deep rib cage and pleasing rear quarters. He had a lovely harsh coat, excellent tailset & carriage and he showed and moved very well. BV. MARGARET WILDMAN

30th October - Midland Counties CH Show. Mia again still not grown enough coat but took her along to keep Geno company. Geno won a big limit dog class under judge Pat Lister, but just missed out on the RCC. Time for a rest now until 2017.

17th September - Darlington CH Show. Decided not to show Mia under all round judge Frank Kane as her coat is now in a carrier bag. Geno however just hung on to his long enough to take 1st in limit dog and was shortlisted to the last four for the card. Winning his second CC, Best of Breed and Group 1 was Corydon the Ringleader, Geno's half brother and Erin's full litter brother. Lovely show, big entry and all exhibitors relaxed and chatty around the ring. I don't tend to post critiques but I loved this one from Frank Kane. I think Geno has a fabulous head and so pleased that he did too.

DARLINGTON CH SHOW, 17/09/16 - Rough Collies
LD 1 Mejola I Am Persuasive, 3 years beautifully headed dog who can move as well. Not in his best coat & needs more on his tail but stood out here for balance & quality. I liked him a lot & he should go on to better things. His head qualities & expression stay in my mind;   FRANK KANE

​Got a bit ahead of myself and entered Yorkshire Collie, Darlington and Midland Counties CH Shows and now the kids are blowing coats!

A long trip down to the Paignton CH Show on Monday 8th August with Geno and Jake. A rather long day but we had done well under all rounder judge Margaret Wildman (Wildax) in the past so we thought we'd try our luck. To our delight Geno won the dog CC, his second, and also Best of Breed. Jake took Best Veteran in Breed.

31st July was the EACA CH Show. The girls were outdone by the boys today. Jake was placed second in veteran dog and Geno was placed first in limit dog and gained his second Reserve CC under breed specialist judge Valerie Geddes (Ingledene).

Took the boys for a day out at Newmarket Open Show on 19th June. Geno won Best of Breed under breed specialist Dawn Muir (Rayawna) and Jake took second in Veteran pastoral under judge Barry Denyer (Batrapyr).  Erin had been entered but of course is now heavily pregnant.

Geno’s first show out this year after re-growing coat was Lancs & Cheshire Collie CH Show. The two boys were entered under Judge Angela Harvey (Wicani). She awarded Geno second in limit dog and Jake second in open dog so we were very pleased.

Erin finally came in season in April and we decided to mate her to CH Corydon Once in a Blue Moon.

We took the usual trip to Crufts on 10th March. Erin and Geno were entered but nothing this time round.

The year started as usual with the EACA Collie of the Year contest. I only took Erin down with me this year as the others were out of coat. She wasn’t shortlisted on this occasion but we had a nice carvery after the show as usual and won the quiz with Nigel and Gill Whitaker which was a bonus.

December - decided to venture to ring craft for the first time in many years. 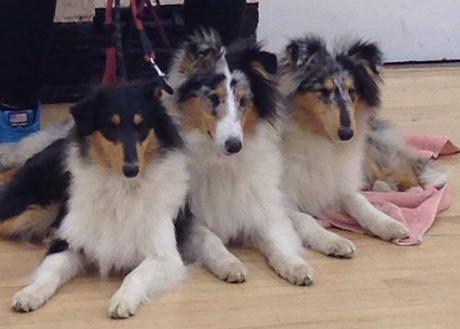