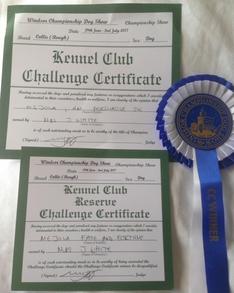 2nd July and off down to Windsor CH Show. I had never been to this venue before and I think it is the best outdoor show i've been to. The judge was breed specialist Miranda Blake (Corydon) and I took the 3 youngsters, who had missed being in puppy by 4 days,  plus Geno. Certainly a day to remember for us. Luther won the junior dog class, Odin won the yearling dog class and Geno won the open dog class. I had to call on the services of Dawn and Ray Muir to take the blues brothers in for me. Geno was then awarded the Dog CC, his third and crowning one, and Odin moved well under handler Ray to take the Reserve Dog CC.

To top off the day Donna took a creditable 3rd in a large junior bitch class. 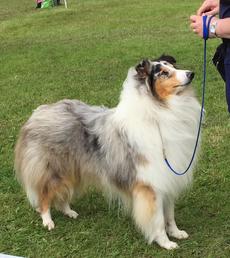 6th May and off down to Birmingham National CH Show. Took 5 of the gang under all round judge Stuart Mallard. Luther, Odin, Geno and Donna all winning their classes and Mia being place in hers. Great day out.

​​18th June and another good day at the Wombwell & District CS open show. All round judge Steve Atkinson (Hollinswell) was judging the breed and the group. Erin took 2nd in post graduate, Geno took 1st in open, Best of Breed and Pastoral Group 4 and Luther took 1st in Puppy, Best Puppy in Breed and Pastoral Puppy Group 1. So the Blues Brothers as we now call them have each won a puppy group.

11th June and a good day at the Ashfield & District CS open show. I had to split the pups over the 3 classes. Luther won the puppy class, Donna came 3rd in post graduate and Odin came 3rd in open. All 3 pups then had to challenge each other and Odin took Best Puppy in Breed under judge Chrissie Pellegrini (Avebury) and then went on to take Pastoral Puppy Group 1 under judge Frances Richards (Elemark).

8th June and off down to the Malvern Showground, another venue I like, but unfortunately the weather forced us into the concrete sheds which aren't usually bad but today was so noisy due to unattended dogs that you couldn't hear yourself think. The judge was all rounder Betty Peach (Rosdyke) and she placed Luther reserve, Donna VHC, Odin 2nd and Geno won a big limit dog class. After this show he is going to be moving up to open dog as he has now won the maximum limit classes.

​3rd June was the British Collie Club open show at Overseal. I like to support this club and the venue is nice and nearly always outdoors in a big field. Luther was placed reserve in his class but Odin and Donna both won theirs under breed specialist judge Tina May (Maqueeba).

1st June and we are back at the Stafford showground for the Staffordshire and Birmingham Agricultural Show. Judging was breed specialist Jan Milligan (Alfsden). Erin was 3rd open bitch, Donna 2nd in post graduate, Luther 1st in puppy and Odin 1st in junior and Best Puppy in Breed. Having to put them in classes I normally wouldn't with there being 3 pups.

22nd July and off up to Harewood House for the Leeds CH Show. The weather was horrendous and the dogs were wet through getting them in to the ground undoing the previous day's bathing and grooming. Luther won the Junior dog class but I had put Odin in Post Graduate as there was no yearling class and I can't put them both in the same class. Odin did fabulous and won the post graduate class and I like to think he came close to getting another RCC. Geno was given reserve in open dog and Donna VHC in Junior bitch. Thank you to judge Ros Macdonald (Rossavon).

15th July - NW&PBS CH Show down at the Malvern Showground. Took drinks and nibbles with us to celebrate Geno's title and was nice to catch up with everyone. Didn't make things easy for myself by taking 5 dogs too. The judge was breed specialist Steve Barrett (Brooklynson). Geno was unplaced in open dog, Donna VHC in junior bitch, Erin 2nd in limit bitch and the blues brothers both won their classes.

9th July - a long trek today down to Somerset for the WECS CH Show. I only took the boys today under all rounder Meg Purnell-Carpenter (Overhill). Luther and Odin came away with 3rds and Geno a reserve.

8th July - I need to reign myself in, taking 5 dogs on my own is hard work. Well off down to Peterborough for the East of England CH Show, although no CCs for us.  Erin was placed 2nd in open bitch and reserve best bitch, Donna was 2nd in Junior bitch. Luther was placed 1st junior dog, Odin 1st yearling dog and reserve best dog whilst Geno was 1st open dog and best dog. All this under all rounder Sue Bird (Bridus).

19 March and we are back at the showground again, this time at the Retford C S show. Luther was Best Puppy in Breed under judge Mike Braddish (Bradmigail) and went on to take Pastoral Puppy Group 4 under judge Bridget Bodle (Kitarn).

18 March and back to the Newark Showground for the NSFKA open show. Luther won the puppy class but Odin came from the junior class to take Best Puppy in Breed and Erin took Reserve Best of Breed under judge Colin Laybourne (Dominoesdale).

12 March and off to Crufts. Mia and Geno were unplaced in their classes but Luther was placed 1st Minor Puppy Dog.

4 March off to the Newark Showground again. Erin and Odin both winning their classes, but Odin beat mum to Best of Breed. Erin had to settle for Reserve Best of Breed but was jumping for joy when first mum Miranda turned up to watch.

25 February and off to the Newark & District CS open show at the Newark Showground. Geno came 2nd in open and Luther was 1st in puppy and Best Puppy under judge Penny Roberts (Archaeus).

11 February was the NWPBS open show with judge Ann Flint (Highnol). Odin was placed 2nd in puppy and Geno 1st in open dog and Best of Breed.

4 February and off to Midland Collie CH Show with Donna and Odin. Not a great day for us but pleased with how the fur babies moved on the floor.

21 January was Manchester CH Show. No tickets for us but qualification for Crufts in certain classes. Good day for my boys with Geno taking the open dog class and baby Luther coming third in puppy dog and qualifying for Crufts.

Sunday 15th January and this time the Nuneaton C S open show at Ryton-on-Dunsmore. This time Odin and Geno were entered. Odin seemed to take it all in his stride and also came away with a 2nd in Junior. Geno took the open class, Best of Breed and Pastoral Group 2 under judge Peter Bakewell (Norwelston).

We decided to start entering a few open shows, with 3 growing pups it's time to see what they think of showing. Saturday 14th January was the Worcester & Malvern Open Show at the Three Counties Showground. The hall was very noisy and the tannoy very loud but once in the ring Luther moved and showed as i'd been hoping he would. He got a creditable 2nd in Junior. Mum Erin hadn't been out for almost a year but she won the open class and took Reserve Best of Breed.

9th April – Great day down at EACA open show. Always a lovely show, brilliant weather and great atmosphere around ringside. Took 5 of the fur kids for a day out, which was quite a challenge. Judge John Carter (Montzella) seemed to like my babes. Luther won the Puppy Dog class, Donna won the Puppy Bitch class, Mia third in Limit Bitch and Erin third in Open Bitch. The star of the day was Odin. I had put him in Junior Dog as Luther was in Puppy. He won the class and went on to take Best Puppy Dog. He then challenged against the Best Puppy Bitch and won Best Puppy in Breed. Then at the end of a long day he went up against the Smooth Collie Best Puppy in Breed and was awarded Best Puppy in Show. 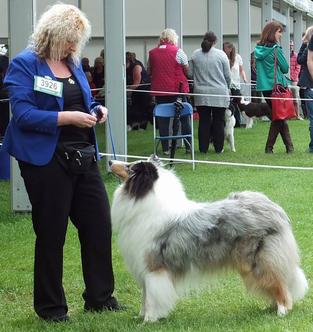 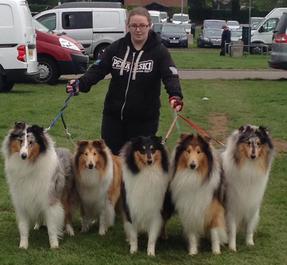 3rd August and we set off to contend with the rain and mud that was Bakewell Show. Running round the muddy, waterlogged ring was hard work. Judge Jenny Miller (Feorlig) awarded Donna, Luther and Odin firsts in their classes. Erin was second in open and Odin took Best of Breed. After another downpour during the group judging Odin took Pastoral Group 4 under judge Krystyan Greenland (Rajarani). 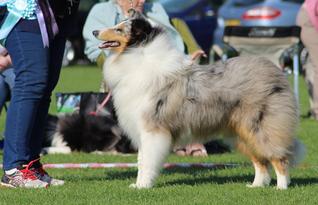 Off to support a few open shows this weekend. 23rd September was the Stafford show under judge Yvonne Haensel (Sherkal) who gave Odin a 3rd and a 1st and Erin a 3rd. 24th September was the Pollard Show and Odin was placed 1st and then 2nd under judge Mr K Goodwin (Highbrook). To finish off a trio of shows was the Nidderdale Agricultural Society when Odin received two 1sts from judge John Thirlwell (Ferndel) on a very wet day.

​16th September and off up to Darlington CH Show, this time just with Odin who was placed second Junior Dog and third Yearling Dog under judge Mr J Basing.

9th September and off down to Richmond. Heavy traffic and a tiring day. Just took the blues brothers. Luther was placed reserve in Junior Dog and Odin 2nd in Yearling dog under judge Tracey Wilkinson (Altricia).

6th August and off down to Littleport for the EACA CH Show. Bitch judge Stella Clark (Astrellita) placed Donna VHC in the Junior bitch class and Erin 2nd in the Limit Bitch class. Whilst Luther got a 2nd, Odin a 3rd and Geno unplaced under the dog judge Brian House (Fivejays). 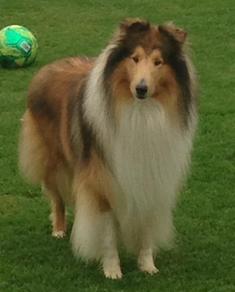 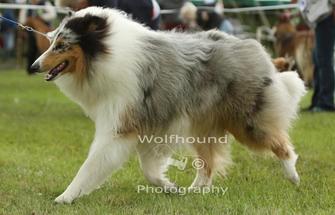