Richmond CH Show was held on Friday 10th September. Judge Josh Blackburn awarded Vinnie 1st in the Graduate Dog class. Polly returned after a long spell out but was unplaced in a large Open Bitch class full of ticket winners.

Finally we have a show! East Anglian Collie Association held its Championship show brought over from 2020 along side its scheduled open show in April 2021. We had entered 7 dogs but only took 5 who all had a great day and were placed in all their classes. In the Championship show Ruby was placed 4th in Yearling Bitch and mum Grace 5th in Open Bitch under judge Anne Smith (Tentola). The boys did even better under judge Mick Taylor (Bruernish) with Geno being placed 1st in the Champion Dog class, Odin was placed 2nd in the Open Dog class and star of the day Vinnie, winning the Yearling Dog class and the Reserve Dog CC

In the open show judged by Penny Forster-Cooper (Sheltysham) Geno was placed 5th in Veteran Dog, Vinnie 4th in Yearling Dog, Ruby 4th in Yearling Bitch and Grace pulled out the stops to win the Open Bitch class, Best Bitch, Reserve Best of Breed and Best Opposite Sex in Breed. 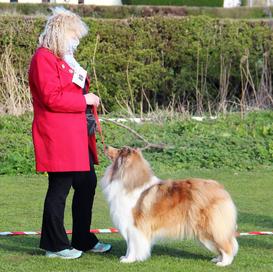 17th July and it's Working and Pastoral Breeds Society, at my favourite showground, Malvern. Derek Allsopp (Sandmel) was our judge. Vinnie again taking Yearling Dog and Ruby second in Yearling Bitch. Odin was entered but decided to give him a rest as coats are now starting to lift.

Sunday 11th July and off down to Peterborough for the East of England CH Show where we now have CCs under the KC trial. Niick Smith (Tentola) was our judge. Vinnie won the yearling dog class watched by his breeder Anne Hassock (Camanna). Ruby was placed second in the Yearling Bitch class qualifying her for Crufts. Odin again the star winning the Open Dog class and the Reserve CC.

1st August and off down to Ely for the second EACA CH Show of this year. I had entered 7 but due to coat losses only took 5. First up Erin who, after a long time out of the ring, showed and moved superbly to take a 3rd in Veteran Bitch. Next Geno who won the Veteran Dog class and took Best Veteran Dog, ably handled by my granddaughter Torri. Vinnie won yet another Yearling Dog class and Ruby won Yearling Bitch. Odin took 3rd in the Open Dog class. Judges were Sue Randall (Ladnar) for dogs and Bev White (Maneric) for bitches.

No EACA COTY as there were no shows last year so no dogs qualified. 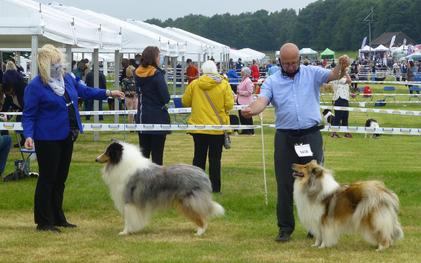 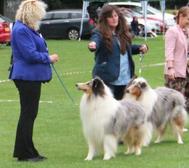 27th June and the first general championship show of the year - Southern Counties. Our judge was all rounder Toni Jackson (Elbereth). Vinnie had to go in to Post Graduate Dog as there was no Yearling class but managed to beat the older dogs and win the class. Next Odin pulled off a win in the very strong open dog class and Ruby settled for Reserve in Post Graduate Bitch - the largest class of the day.

Next to the dog challenge and a dream come true day. Odin was awarded his 3rd Challenge Certificate and then went on to take Best of Breed. Nothing compares to these sort of days. With a face covering on in the ring no-one saw me crying!